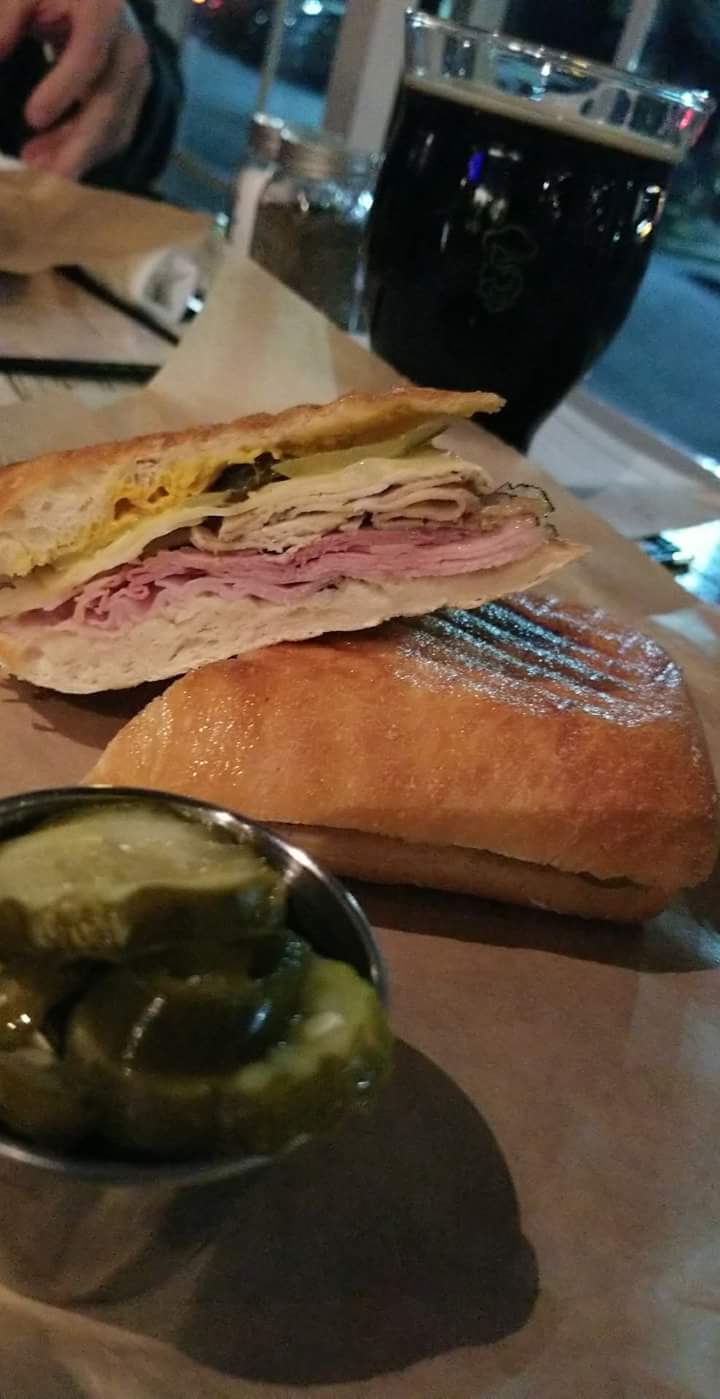 Persistence is the antidote to mortality.

I realize that’s a fairly dubious way to begin a food post, but hear me out por favor. Because me and Linds B learned the importance of persistence this week whilst firing up the Cuban Sammy search once again after a brief winter hiatus. We made way for the land of milk and cocoa- Hershey, Pennsylvania- to check out Philip Arthur’s. The quaint little cafe is a short stroll from Hershey Park, and it offers up a Cuban panini we decided to take for a ride.

We grabbed the lowdown on this rendition from the website and despite the fact they make their version on panini bread, we gave it our seal of approval. Flexibility has been the name of our game from the get, because playing by the rules is all well and good but tasty is always better.

The problem with this particular sandwich was simple. We never got to partake since Phillip Arthur’s was closed for renovations and Google didn’t happen to mention that little detail. So there we were, freezing our asses off as we trudged back to my car and deliberated our next move. All hope seemed lost . . .

Hey kids, here’s the dope about that hiatus I spoke of earlier: Unlike 1600 Pennsylvania, we want to be totally transparent as per all house business. These posts documenting our search for the Holy Grill of sacred tasty have not been brought to you in “real time”. Not exactly. There was some lag time, seeing as how we began posting our Cuban sammy adventures last fall on Facebook, and it was so much fun that we decided to make it a regular segment here at Sorryless. I’m happy to report that we are all caught up, and readying ourselves for the stretch run in our search. I realize this revelation is not scandalous or controversial, and for that we offer our sincere apologies.

With Phillip Arthur’s having harshed our mellow sufficiently, we made haste for an alternate locale where we could redirect our Cuban sammy adventures. Problem was, we didn’t have a backup plan so Linds took to Googling area joints in the hopes we could pin something down. We drove through Hershey and into Elizabethtown with no luck. Same thing with Mt Joy and Landisville. Nada Colada.

I hit the highway as we tossed around options and just when I was about to wave the white flag in surrender (Yep, TGI Fridays), Linds saved the day.

“Oh my fucking God, you’re not going to believe this!” She laughed. “There’s a place and it’s three minutes from my house . . .”

I put together a Cuban recently when my pal invited me over so I could rescue a pork loin from the frozen tundra of his freezer and make something of it. As you can see, I went crazy with the pork- I reckon I put a pound and a half of pork in each sammy. But that’s only because I don’t believe in wasting food and it just killed me to think that he was probably going to make hash with the rest of it. 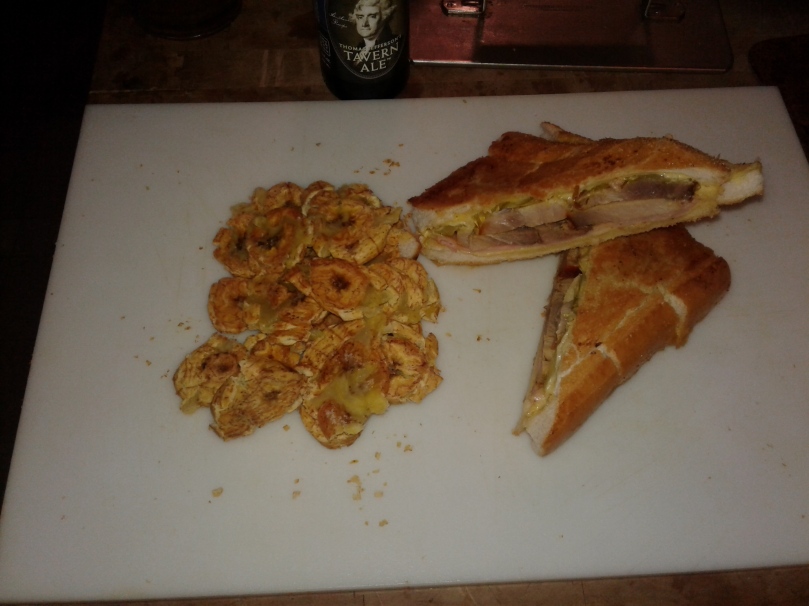 Mad Chef Craft Brewing may be the new kid in town, but it’s catching up right quick. As per yours truly, it had two things working against it. For one, it’s one of those seat yourself joints where you place your order at the counter and then await your grub. I can never get comfortable in this kind of place. For another thing, it’s a craft brewery and I’m not the biggest fan of the Baskin Robbins Effect that has permeated the adult beverage scene.

But . . . beggars ain’t much for choosing, and besides, this place had a hum to it. We hit the counter and I asked the lovely young lady for two of her finest Cuban selections plus a recommendation from the beverage chalkboard. I ended up going with the Porter Rico- a brown beer with smooth tones and silky depth. I was digging the caramel swirls and chocolate dip of this malted roast . . so maybe there’s hope for me yet as far as this whole craft beer thing goes.

The plan was to partake of the sammys and then move elsewhere for a couple rounds of friendlies. Mad Chef was all about business, and man! Do they know their business when it comes to flavor. Less than ten minutes after placing our sandwich orders, our sammys were sitting on the table in a most delectable come hither pose. The blueprint was traditional goodness: slow roasted pork loin, ham, Swiss, pickles and mustard. The precious cargo was pressed to perfection on panini bread. How these mad scientists were able to construct this beautiful beast in such short order and make us feel like we were kicking back on South Beach with the real deal? Cosmically brilliant is what it was.

This here is Linds B’s review as per our Facebook post: Restaurant option #5 on the day. Much like a sexy woman passing you by,  this sandwich left us saying “goddamn!”. To our complete surprise this charming brewery located 3 short minutes from my house in East Petersburg blew us away with their amazing Cuban. Packing all the right ingredients, with the absolute best flavor we’ve encountered yet; We’re scoring this beauty with a solid 8/10. The only downfall we encountered in our amazing discovery was the mustard. It was just a smidge too powerful. Other than that, delicious. What a perfect and scrumptious way to come off of our holiday hiatus. Would 100% check this place out again y’all. 😎 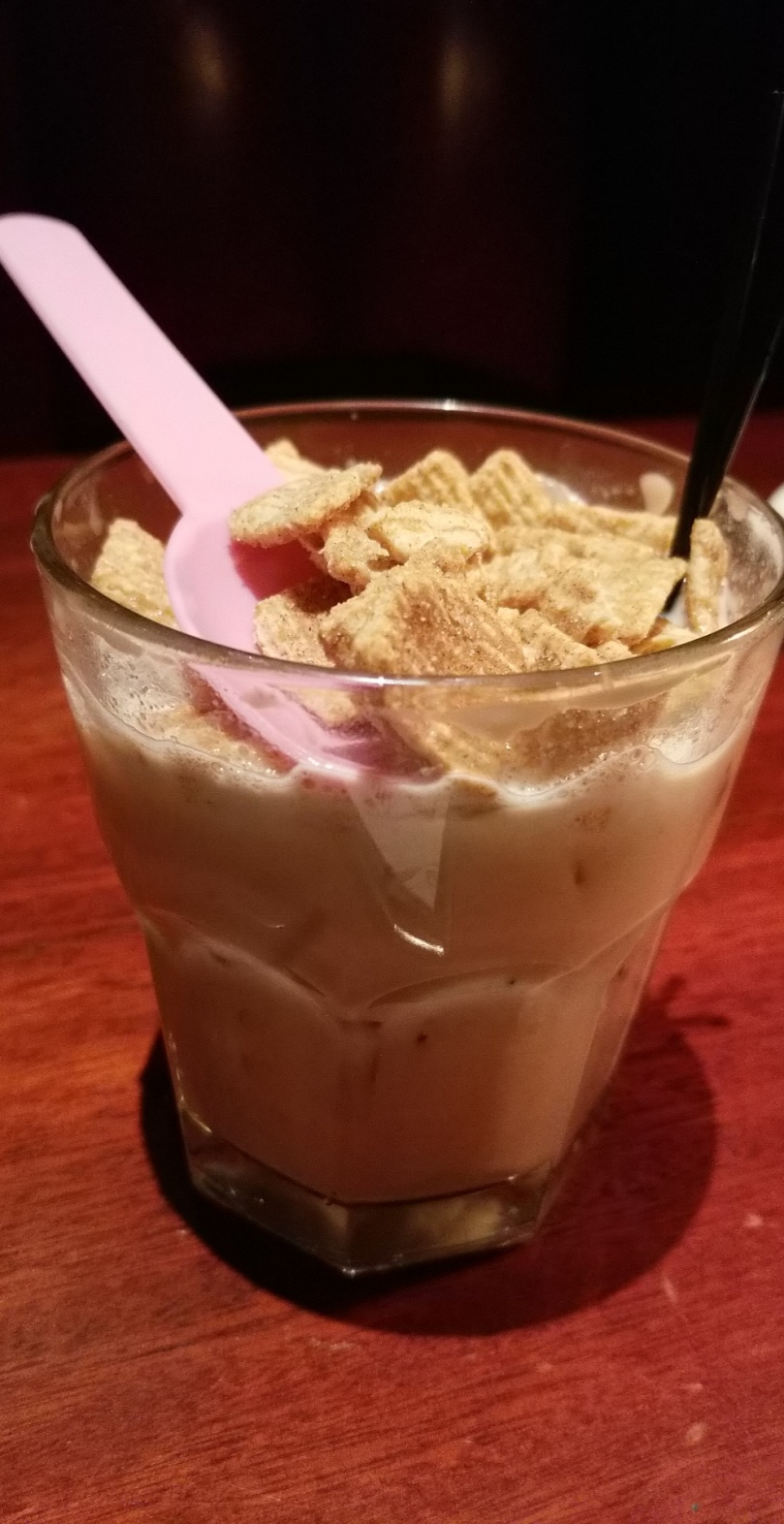 Needless to say we were exhausted after our long way home trek to the latest sandwich grab, so we moved our business over to J.B. Dawson’s for a couple adult beverages. We had to map out our plans for the next adventure, whilst making certain we didn’t become overly reliant on Google for the win. So I went with the Cereal Killer- a White Russian topped with Cinnamon Toast Crunch. I’m never going back to whole milk for this favorite cereal of mine, which means that my mornings just got a whole lot more interesting.

Linds went with a grownup drink called “You’re My Boy Blue”-  an electric lemonade rave party with vodka and curacao. Every sip is a spring time preview, every warm rush a summer’s dream. It’s how you go when you want to chase the blustery reign of winter into its corner for a time.

So that’s a take on our imperfect search for the Perfect Cuban sandwich. We hope you enjoyed it and that your food is tasty and your company sublime. And when the road starts feeling too long, just keep your eyes on the prize and be sure to verify your Google search.