I can’t believe it’s Super Sunday already. It feels like only yesterday that I was putting together my fantasy league team whilst under the illusion my Dolphins had a chance to see January . . . if only for sixty minutes.

The Patriots are making their annual trip, preparing to take on yet another bird. Last year’s Falcons replaced 2015’s Seahawks who have been unseated by this year’s Eagles. Soooo, Cardinals fans might want to book their Atlanta trip for next year’s Super Bowl before Patriots fans grab up all the best tickets.

The good news for Eagles fans is that Tom Brady will eventually succumb to Father Time. The bad news is, it ain’t happening soon enough. And if you happen to be one of those peeps who is suffering from Patriots fatigue, well . . .there’s always baseball!

“Ain’t no ‘if,’ man. When we win on Sunday, ain’t no telling what we’re going to do,” Jeffery said. “But we’re probably going to celebrate, have some fun.”

2- The Eagles insist they are getting no respect.

What I hear when the Eagles rail on about the lack of respect people are showing to a 13-3 Super Bowl team . . .

3- Justin Timberlake will perform at this year’s halftime show. It will be his first appearance since the infamous “Nipplegate” episode with Janet Jackson.

What everyone watching will see as they watch this year’s halftime show.

Okay, I just had to sneak that video in because it’s fucking hilarious. No kids, the correct answer is Nipples for a thousand, Alex!

The Patriots have Giselle.

5- Vegas books reported a multi-million dollar wager was laid on the underdog Eagles. This elicited a conversation with a pal of mine that went something like this.

As far as my .2 thought on today’s game? I won’t be watching the halftime show unless Janet Jackson shows up. And since that doesn’t seem likely, Imma go ahead and tell ‘yall what’s going to happen in Super LII, so there really is no point in even watching . . .

In the first half, absolutely nothing happens.

The halftime show proves to be a nipple free affair, but NBC puts a thirty minute delay in place just in case. The time lapse plays havoc on television viewers, and Fox News erroneously calls the game for the Patriots as a result. The Russians deny any involvement in the snafu. 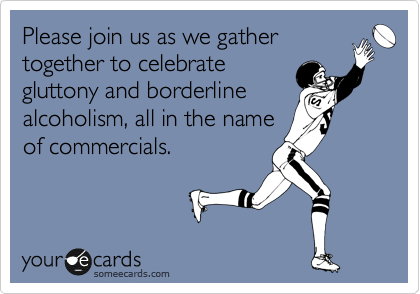 The third quarter is when things really start cooking. Nick Foles pulls the Statue of Liberty play on the Pats and Jay Ajayi takes it eighty yards to the house to open the scoring. From there, the Eagles score thirty five unanswered points. They head to the fourth quarter with a 38-3 lead. In spite of this, Pats coach Bill Belichick is overheard saying “We have ’em right where we want ’em!”

In the fourth quarter, the Patriots stage a historic comeback (yep, again) and tie the score at 45 with just under two minutes to go. Tom Brady tosses six touchdown passes, including a Hail Mary to himself. Rob Gronkowski leaves the game with concussion symptoms after Brady slaps his helmet with his 283 diamond Super Bowl ring during a touchdown celebration.

Nick Foles and the Eagles take over at their own five yard line with a minute and a half remaining. A false start by Philadelphia moves them back to the goal line and three incomplete passes later, they are staring down the barrel of a fourth down and forever. Coach Doug Pederson sticks to the script that got him here by deciding to go for it. It seems that only a miracle can save the Eagles now. Or gravity . . .

On fourth down, Foles drops back into the end zone and flings the ball straight up into the air. Upon returning to earth, the ball is deflected by several players before falling into the arms of Eagles wide receiver Nelson Agholor, who picks up the first down by half a yard. The play is dubbed “The Isaac Newton” and it revs the green engine as Philadelphia marches down the field and with twelve seconds left, the Eagles have a first and goal at the Patriots nine yard line, Pederson inexplicably decides to leave his field goal kicker on the sidelines rather than have him attempt the Super Bowl winning field goal. As he would later explain, “I don’t trust Jake Elliot unless it’s from fifty yards out,”.

After a play action pass sails out of bounds, there’s time for one more play into the end zone. Against a heavy New England pass rush, Nick Foles finds Zach Ertz for what appears to be the game winning touchdown with one second left. But referees convene and the play comes under review to determine if Ertz did in fact make the catch.

Michaels: It’s when the catch is conceived!

Collinsworth: No! It’s when the football is physically visible!

Sideline reporter Michele Tafoya suggests that if the NFL cannot decide what constitutes a catch, the Supreme Court should step in. She then uses several replays that show Ertz juggling the football, proving that he did not make the catch. Her argument is eerily reminiscent of the JFK investigation.

The instant replay review drags on for more than an hour, allowing NBC to air two episodes of Will and Grace. Despite the sitcom’s popularity, viewership plummets since there’s no Tom Brady to root/hate on. In response to the deflated numbers, Commissioner Goodell tells Brady not to leave town.

When they finally come to a conclusion, Head Referee Gene Steratore tweets out their decision before making the announcement . . . Touchdown! The Eagles celebrate for several minutes, drawing one penalty another until Coach Pederson feels comfortable enough to let his placekicker attempt a sixty yard extra point, which he nails as time expires.

The front page headlines of the Philadelphia Inquirer say it all. Ertz So Good! Bud Light follows through on its promise to buy beer for the entire city of Philadelphia, and the City of Brotherly Love is transformed into a real life version of The Purge. After the game, Tom Brady announces his retirement and signs with the Cleveland Browns. Coach Bill Belichick decides to follow his dream and become a fashion designer. Patriots owner Bob Kraft begins drawing up plans to turn Gillette Stadium into a strip mall.

As for the champs, Nick Foles signs on with Fox/Paramount to star in the Napoleon Dynamite reboot. Fletcher Cox apologizes for his team’s poor defensive performance by donating his winner’s share to the charitable organization Free Melania, and Carson Wentz sues a Nevada town and wins the rights to “Carson City”, after which he guarantees the Eagles will repeat as champions.

The NFL scores record ratings despite all those peeps who insist they’re boycotting the sport forever. Commissioner Goodell announces he will step down at the end of his current contract to become the wealthiest Buddhist monk, ever. Giselle Bundchen lambastes the NFL as nothing more than  “a primitive blood sport that thrives on violence and crooked decision makers,” before revealing that she is buying the Miami Dolphins because “they have beautiful uniforms and they don’t hit anyone,”.

Richard Branson wins the rights to host Super Bowl 60 on the moon, and construction begins on a 100,000 seat bio-dome. When a reporter criticizes the locale by asking where fans will spend the weekend leading up to the big game, Branson snarkily replies.