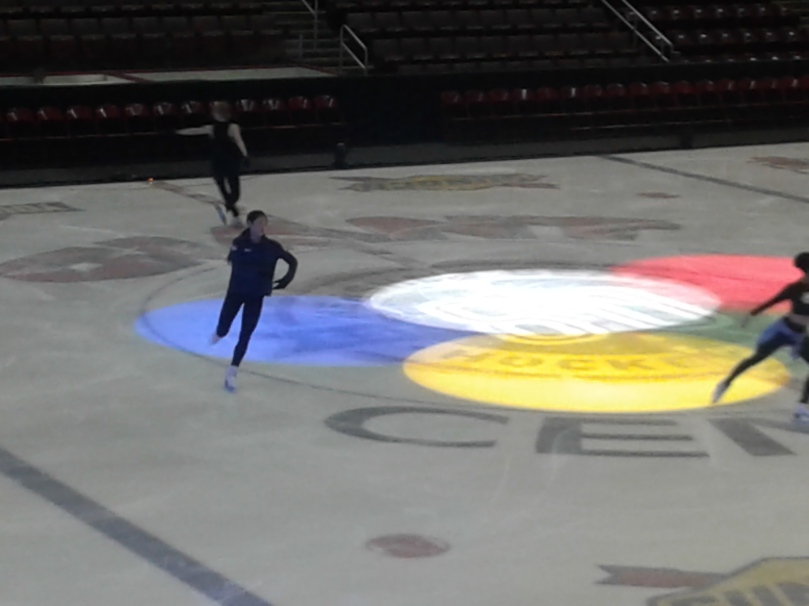 Okay . . maybe it wasn’t lost after all. But admittedly, it has waned over the last few weeks. Blame it on the weather or James Comey’s new tome, but whatever it was . . it was getting to me.

One of the drawbacks to being a passionate individual is that the ebbs that switch out with the flows can be a real bastard. Add to this my inability to budget my thoughts into some neat and tidy semblance of organization . . . because when I preoccupy myself with something, I tend to never mind certain matters that . . yanno, need tending to. So needless to say, there’s a better and worse to this passionate side.

Both of which came out to play yesterday afternoon when I took in a Stars on Ice show in Hershey, Pennsylvania. If you’ve never been to an ice show, I highly recommend it. There are few endeavors that are able to marry sports to entertainment the way an ice show can. It’s like theater met a sporting event and they had this magnificent baby of a performance.

The downfall of my passionate ways is that I tend to jump before thinking, and this can be problematic. So there I was, driving up to Hershey in the early afternoon when it finally occurred to me that “Hey . . isn’t it a little early? What time DOES this thing start?” to which she replied 7:30. Some quick math had me replying with “No seriously . . .”

Seems we were taking in the whole shebang. From practice skates right up to showtime. Yes, I had bought the tickets. Yes, I had made plans for me to meet up with my sister and niece at the doors at 3 pm. And yes . . I am that oblivious. 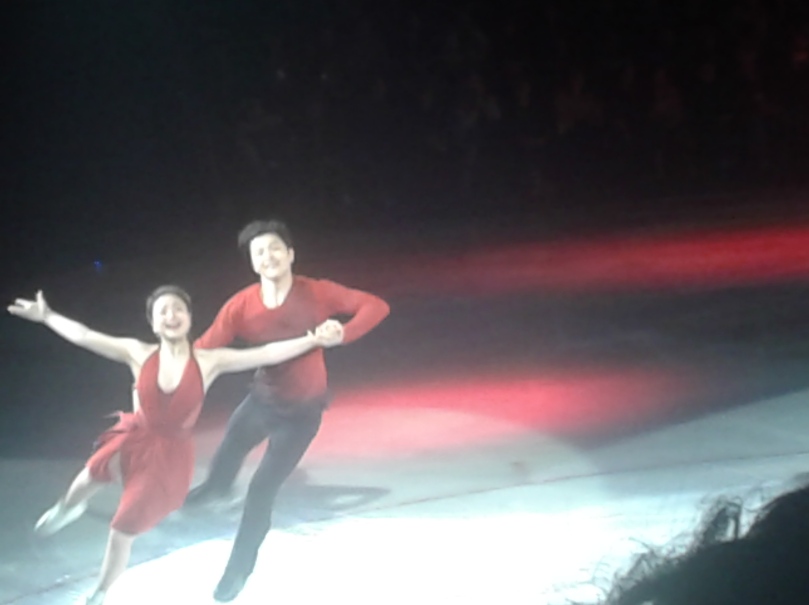 After subjecting my daughter to a litany of questions, which began with “What am I supposed to do for the rest of the afternoon while you guys watch them practice?” and moved into deeper questions regarding life, mortality and beer concession possibilities . . I eventually figured out my shit once I got there.

The girls enjoyed watching the skaters go through their practice routines in front of the small audience, while I lapped the arena concourses to get in my steps whilst making phone calls and texting friends. I even met some of the skaters during a meet and greet later on. So you can say my oblivious nature could’ve done worse.

When the gates opened for the general public at 6:30, my daughter and I constructed our concession strategies. The stand alone beer concession stands were closed tighter than a drum, and this was an unnerving development for yours truly. The food concessions? Still prepping. 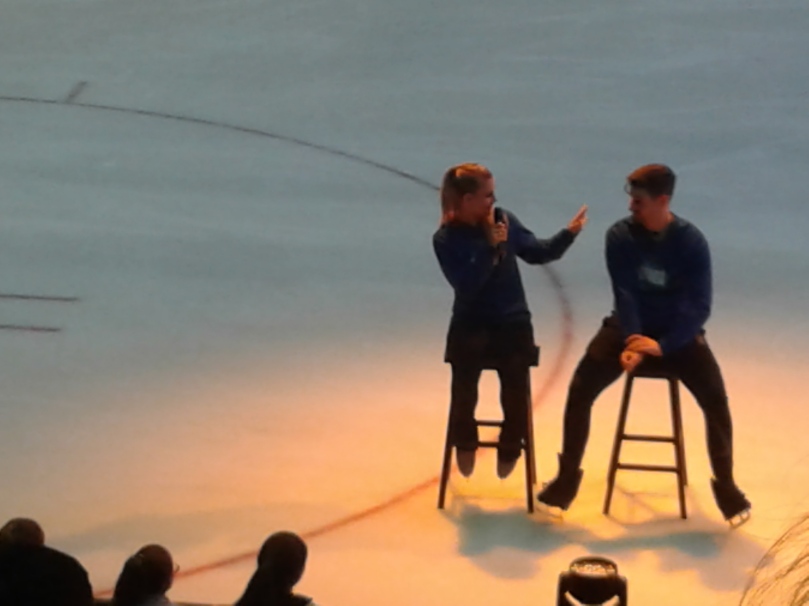 This lag time, combined with a giddily excited crowd whose average age is what keeps Taylor Swift in business, resulted in the formation of lines. To everything. My allergic reaction to lines compelled me to find something to do that didn’t involve a line. The men’s restroom was a natural conclusion, seeing as how the female to male ratio was somewhere around 85-15 and there was no waiting involved. Try that at a hockey game . . .

Thirty five seconds later, the lines had grown exponentially. The concessions were still ‘prepping’ so now I had to make the decision as to which line I wanted to join, seeing as how my first, second and third choices- beer only concessions- were apparently unavailable for this performance.

The concession line I chose was straight out of Dante’s diary. But they had beer, so there’s that. While my daughter went in search of a nacho stand, I observed the staff. There were like . . a dozen peeps, most of whom were just happy to be there. I don’t like throwing shade at anyone who works with the public, but a hint of urgency wouldn’t have killed them is all I’m saying. The highlight of my fortnight in this line came when a woman old enough to be my grandmother grabbed my ass, twice. She was very nice about it, apologizing both times. I texted Linds B, who exhorted me to knock her out. It wasn’t the worst advice, considering that security personnel would’ve expedited my wait.

I returned to the seats just in time for the opening, after which I had to summon my inner contortionist in order to navigate into my seat. After which I realized that my freedom of movement had been stolen from me. I had my adult beverage, my braided pretzel and my Italian sausage, and that would have to sustain me until the show was over.

So really . . it’s a good thing the show kicked ass. From the get, this thing was a blazing blossom of boom. The entire cast got the crowd jumping to Pink’s Raise Your Glass. And lemme tell you . . there are few connections quite as simple and sweet as the connection between ice skaters and their adoring fans. It’s as if the seats are plugged in to the skater’s every move, and it never wanes. The visceral plunge is an everlasting possession, retrieved from the cradle of simple dreams gone Broadway. 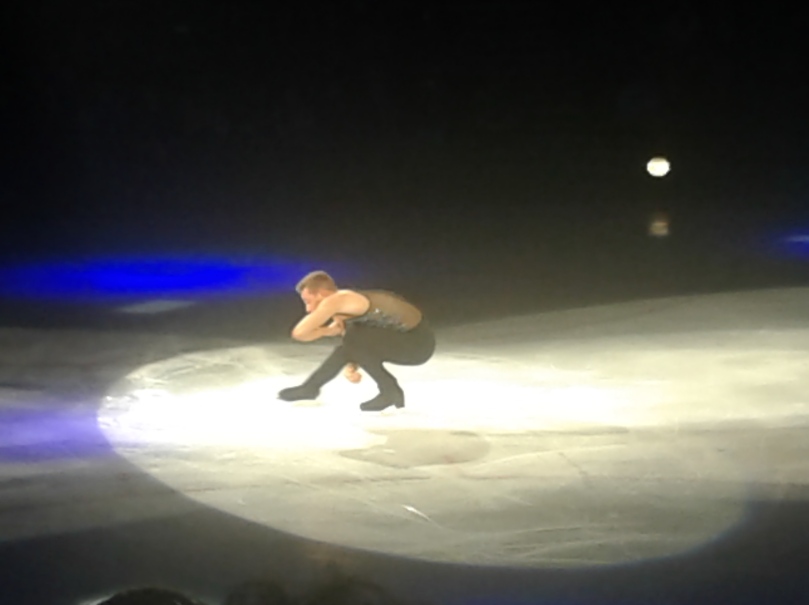 When Jason Brown jumped the place into a mercury risen froth as he skated to Hamilton’s “The Room Where it Happens” . . well, I was every bit as invested as I would’ve been with a Giancarlo Stanton at bat. If you want to know what it means to own a room, look up Jason Brown because the kid was doing it.

A top five  of my favorite Ice moments for the sake of brevity? Okie . . .

5- Anything Jason Brown. The kid is Mike Trout in skates. You stop what you’re doing when he takes the ice, because you know that when God was divvying up talent? He went overtime with Jason Brown.

4- Adam Rippon is a live wire proposition who instigates the crowd into a madness unparalleled. His skate to Adele’s “Remedy” was stronger than a ninety proof selection on a cold night. And the payback just as strong.

3- Maia and Alex Shibutani, aside from being such a lovely couple, are the definition of kismet. They light a fire to the ice, after which they sculpt a starry eyed union into your memory banks. They translate Frank Sinatra for teenagers, and Jay-Z for the old folks with the very same magic. And since it’s my top five list, Imma tuck Madison Hubbell and Zach Donohue into this as well. Because their Q and A before the show was endearing, and because they shook it loose to a Rag ‘n Bone/ Beth Hart ditty that left me crushing on their love affair.

2- The boys, led by Olympian Nathan Chen, introduced me to a new song in the very best way. Admittedly, I’d never heard Portugal. The Man until yesterday afternoon during the practice skates. But by the time they cranked it in prime time, I was sold. What a way to discover a song!

1- When Bradie Tennell finished up her evening with a Patrick Doyle score from “Cinderella”, she had thrown a perfecto. Because from the practice skates to the performance, she nailed it. All of it. She is the Queen of the Triple Axle, for good reason. And believe me when I tell you I ain’t serving up no hype jam on this. Because the truth is, I teared up while watching her nail every landing. She got to me, as if I was listening to opera and chasing it with red wine. A performance that leaves you overcome with emotion, well . . you cannot put a price on that kind of thing.

When you see these kids making it happen in the Olympics and the World Championships . . you don’t often get a peek at how that kind of perfection came to be. Because it’s happening inside the quiet hours, where twisted ankles and countless spills are heaping doubt on those dreams of a roaring crowd.

To think, if I had been a little less oblivious yesterday, I wouldn’t have been reminded of all that. And so, it’s why I love my passionate side. Because even when it fails me so, it leaves me somewhere better in the doing.

I’m good with that.

85 thoughts on “Turns out, my lost mojo was on ice”