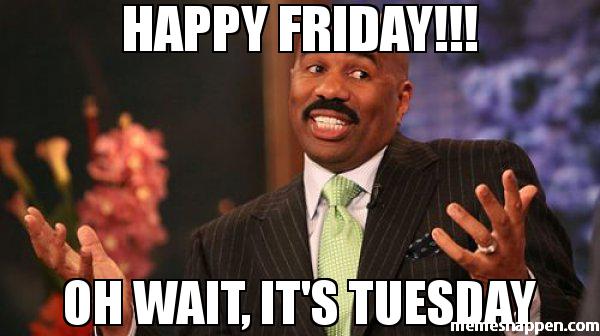 I feel sorry for Tuesdays. Tuesday is like the middle child that gets left with the grandparents when the family goes to Disney World. Whereas Monday is the high profile villain we love to hate and Wednesday has achieved a low key Friday status, Tuesday ain’t got much of anything going on.

So in keeping with this unfortunate legacy, I’ve decided to loose a few observations. If you’re expecting some earth shattering, award winning shit, I apologize in advance . . .

Well, I could go on but the meds are kicking in and the voices in my head are getting sleepy. Apologies to Jurassic Park movies and Chocolate Twinkies for being left in the green room, but I just ran out of time. They will be welcomed back with open arms though!

89 thoughts on “Celebrating Tuesday! Said no one, ever.”