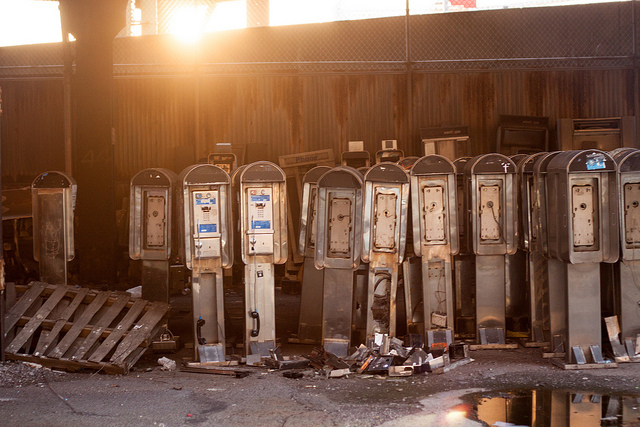 Some time ago, I wondered what had become of all the public pay phones that used to dominate the landscape back in the day. It quickly became obvious to me that such a query possessed the kind of antiquated heft to which anyone born after the year 2000 could not relate.

I was able to come up with a location for these antique stragglers of a time before cell phones. There existed a pay phone graveyard along Queens Boulevard, in the shadows of the Manhattan skyline. The pictures were depressing as fuck; one pay phone piled on the other in rows of obsolescence. It was the same for every city, as I would come to learn. I surmised that city politics prevailed after the excavation of these vintage methods of communication. So for every lucky buyer who was able to procure one to use as a conversation piece in their basement, there were droves that were left to the elements. Progress wasn’t kind to the payphone.

Newspaper vending machines were gifted a slightly kinder fate. A little more than twenty years ago (The technological equivalent is 500 years), almost half of all newspaper sales came out of those clunky newspaper boxes. Less than twenty years later, sales had dwindled to less than twenty percent; mostly thanks to densely populated areas where the boxes still possessed an efficacy for on the go peeps. Add to that the fight many papers wage against the removal of these newspaper boxes in those urban centers, the clever re-purposing utilized by libraries and the robust secondary market for ‘decommissioned’ boxes on auction sites like eBay and the picture is slightly brighter for these vintage pieces.

The point of this post isn’t to provide a history lesson. Hells nah. It’s my way of belaboring the point I really wanted to make since I’ve got a slight case of writers block and rambling tends to help.

Here’s my real point: Don’t look now, but ATM machines are going away too. 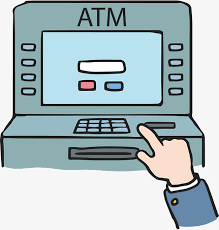 Maybe I shouldn’t take it so seriously. I mean, I get painfully meticulous in what I share, because I realize that what I share has consequences. And that sounds so batshit crazy, I know. But I simply ain’t down with a society that does pay phones like that. It makes me want to tuck myself away in a cabin deep inside a forest, disconnected from the madness; where the only transactions I abide by come in the form of the four essential elements of Western culture. That . . is some Zen shit . . sans the big brother tentacles.

Maybe I’ll bring one of those payphones along, in case of emergency.

103 thoughts on “The dark side of vintage life”