What’s most interesting about LBJ going to the Lakers is that it simply feels like another vacation for the dude. He went to Miami for four years and then came home to Cleveland. Now he’s going to the other coast for another four years, and is there any doubt he resigns with the Cavaliers to finish out his career? Unless, that is, James plans on playing as long as Tom Brady- who plans on playing until he’s forty five . . . or until someone discovers that he is, in fact, a cyborg. Whichever comes first.

Personally, I’m thankful James didn’t drag “Decision 3” out . . because the World Cup is way more interesting news, even if most sports media here in the states ain’t shutting off the LBJ spigot till it runs dry. So we’ll get more devotionals to the King and more questions as to who might come join his posse. And make no mistake, he ain’t beating the Warriors unless he gets him some deputies . . not even close.

Hopefully all that baller business happens sooner than later, because I want me some open highway for the beautiful game of futbol. Unlike the NBA off-season gossip pages that James books passage on every four years, soccer’s four year itch is actually filled with live action; and if you ain’t been paying attention to this particular World Cup, I am sorry.

I ain’t throwing shade at us state side simpletons for possessing a drive-thru attention span when it comes to sports. After all, we are what we eat. And most sports outlets behave like hired lemmings in that they follow one story after the next over the cliff, regardless of its verity or relevance.

I hope LaBron 2K works if only because I still root for Magic Johnson, even now. And because the Lakers haven’t been likable since forever. And because I believes James paid his debt in full to Cleveland when he brought them a title. Let’s please not inject ‘loyalty’ into this when it comes to a free agent athlete choosing his work place. Owners and front office peeps don’t make bank based on being loyal, and neither should the players.

I can see the way James is playing this thing. He figures his great white whale- the Warriors- stands in the way of his title legacy either way; so by moving into their conference, he doesn’t have to worry about losing to them in the finals again. Plus, his presence puts LA in ‘win now’ mode, which means that Magic will do everything in his power to get his new stud a second, and maybe even third star. If that happens, LBJ doesn’t believe Boston, or any other team in the East, can beat him so long as he gets past Golden State.

This is a Michael Corleone move for James. He’s moving the family out West while he still has the clout whilst looking at laying down a monolithic paradigm for next gen superstars. James has always been a vocal presence and a civic minded individual, so what better spot to lay down his ascension to future NBA owner than in the land where power brokers play?

In the present, all James has to do is resurrect some agreeable facsimile of the Showtime Lakers- a team that was born inside my favorite decade- the ’80’s. Unless of course he gets his sidekicks. Because in that case . . expectations go bling. 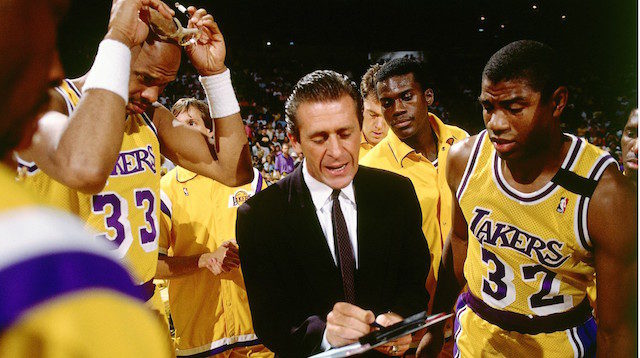 The Showtime Lakers were Magic and Kareem, James Worthy and Byron Scott and lemme put it this way: If Cirque du Soleil was a basketball team? They would’ve been the Showtime Lakers. And while I patterned my set shot after Worthy, he wasn’t the reason I slicked back my hair. Pat Riley was the coolest cat in the room and I fell in love with the way he coached up a starting five. Riles was style and substance. With his Armani suits and slicked back hair, he was the living breathing embodiment of a Hollywood ad campaign.

And those Lakers teams led by Riley are the reason I fell in love with the Association in the first place. They were a mythological advancement for a league they had helped save- along with the Boston Celtics- years earlier. Pat Riley put it best when he said it was an all or nothing proposition when you play for a star laden Lakers club. “There’s winning and there’s misery,”. All or nothing. Hang a title banner or get out of town. I’m thinking if Riley were to offer any advice to LeBron in the event he builds an LA ‘superteam’, it would be short and sweet.

You better fucking win it.

25 thoughts on “Winning and Misery: A Love Story”