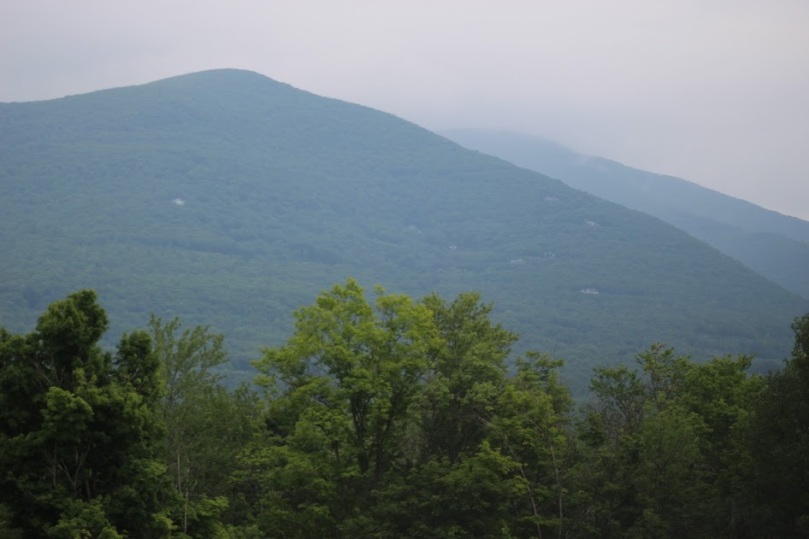 When I find myself inside a particularly robust storm, my arms and legs feel connected to the dense anvils of cold dust and flaming vapor that transform the skies into a heavenly spout. The basic algebra of my exertions acquaint themselves with a canvas straight out of Caravaggio’s brilliant mind and things go sublime.

The town of Woodstock is a roaming notch that slinks along the unshod terrain of the Catskill Mountains, like a draft that tickles a giant’s toes. The town was born to water and sun. It is a graceful plunge of pluck and spirit, music and rhyme. And by Tuesday morning, the feeling it engendered was quickly making us forget the other possible locales we’d tossed around previously.

For breakfast, Q and me had feasted on a sensational frittata she cooked up. Take it from me, when a girl who loves all things garden and Tuscany offers up this dish? You let her take the wheel. We talked about blogging and music and we engaged in a long standing debate as to our respective dialects. She finds my syntax to be mostly charming, but for a certain postwar (Revolutionary War . . that is) grammatical affectation. Whereas yours truly has ditched the “u” in honor of our founding fathers who kicked British ass, Q and her peeps north of the border still play by the King’s rules.

We bandied topics as we ate, revisiting our difference of opinion as to the letter “u” time and again. Throughout breakfast, to our car ride into town, to our sharp left onto Comeau Drive to a hiking trail that sits mere minutes off the main drag. No topic of conversation could chase this matter away for very long.

Our hike consisted of two main trails. The first trail was mostly flat with little mystery to it, and to make matters even less thrilling . . it was clearly marked. Clearly marked trails are just the slightest bit redundant when it comes to community parks. I mean, why mark them at all when you have chatterbox cell phone users and packs of moms and babies traipsing around? We were more likely to get lost in a local mall than on a trail whose ‘wilderness’ possessed a strong signal and Birkenstock prints. The real excitement came whilst exiting the trail, when Q snapped a family of deer streaking across the meadow.

The second trail provided a more worthwhile conversation for our feet and allowed us the trespass of some hilly terrain. Just like that, we’d removed ourselves from the madding crowd of cellphones and brand packs; replaced by the tranquil hum of nature’s gospel spell. The trail snaked around to a stream whose flow was a mesmerizing gallop. A brisk current strummed its timeless melody, and we skipped across rocks like schoolkids, just to be closer to that wonderful sound. 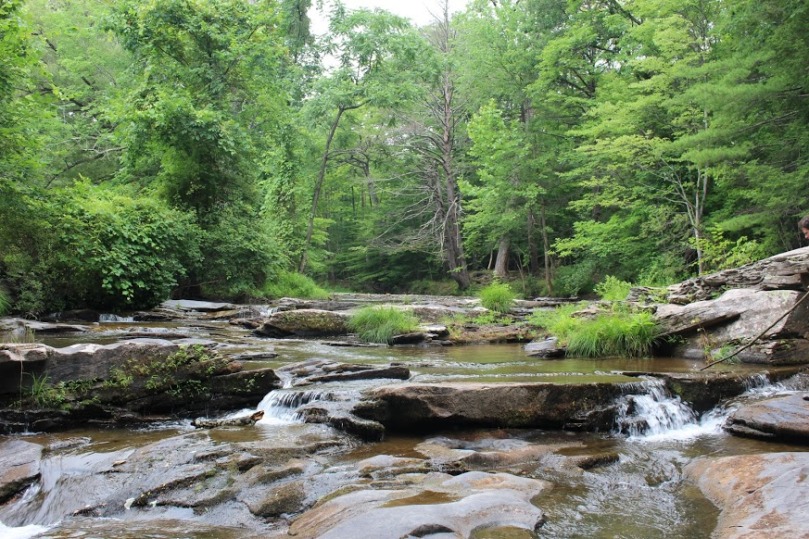 Of course, Q was the rule breaker who defied the “No Trespassing” sign and moved across rocks until she had gained the middle of the stream. I toed the line and searched for signs of fish bubbles along the banks. She claimed eminent domain as per her photography, and I wasn’t about to argue. Not when the letter “u” was still open for debate.

By the time we arrived back at the cottage, the early afternoon had grown dusk-like. As I changed into my running gear, the skies opened up. Perfect.

I took to the road in search of a running path, and I found one about a quarter mile down the road. I turned right onto a service road that wound up and around into a labyrinth of warehouses and manufacturing plants whose sparse signage left my mind spinning with all manner of science fiction scenarios. And just when I was ready to investigate further, the first thunderclap jolted me back to my senses.

And that’s when I realized I was more than a mile from the cottage and a stone cold bulls-eye for anything Mother Nature wanted to throw my way. I calmly headed back, concentrating on the morning I had shared with Q; thinking back on our conversations and the lively mood that carried us.

The rain provided crystalline slashes across the landscape and by the time I arrived back at the entrance to the service road, I was soaked through. Having navigated my way through the relentless thicket, I felt duly inspired to loose one final mystery before my return, so I headed further down until I reached the next road. It wasn’t long before I was second guessing myself, as another thunder clap seemed to stop just short of my back pocket.

I headed back, jumping small puddles and giving myself to the wading ponds that could not be avoided. I felt the density of those hovering clouds in my pores and it almost made me forget the lightning snaps, which had become more persistent now. I traversed the last quarter mile at a steady pace, and just as I was approaching the entrance to our cottage, I saw them.

A family of deer stood about twenty five yards off to my right. I stopped in my tracks and the five of us just stared at each other. We spoke not a word, and yet, we said a million different things. And in that moment, in the middle of that caterwaul of fire and rain, the universe was having its way.

45 thoughts on “Three Days In Woodstock”