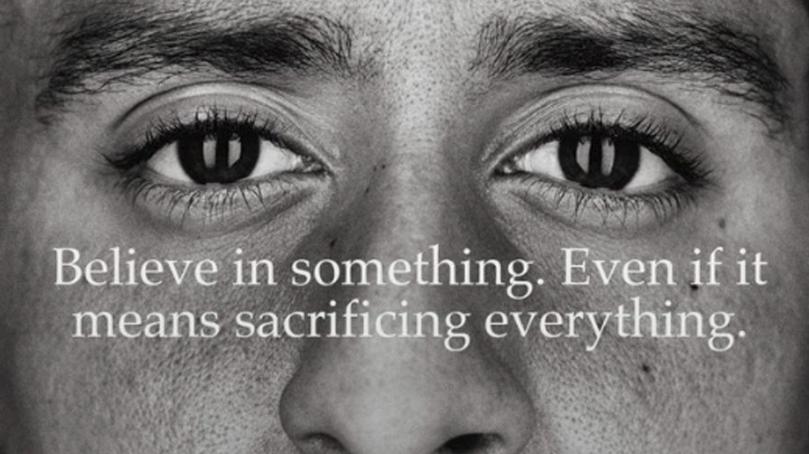 I am totally down with the new Nike ad campaign that features former NFL quarterback Colin Kaepernick, even if I’m not sold on the feng shui of this union just yet.

Let’s chill with this idea that Kaepernick is this generation’s Muhammad Ali. This, ain’t that. I’m not talking about what each man risked in their respective protests, because each did result in a loss of employment. No, I’m talking about the dialogue that was culled from it.

Kaepernick is the face of a movement that is still struggling to define itself even now, mostly because you hardly ever hear the man speak. Silence does not a movement grow, and it’s one of the many reasons the anthem protests have stuttered and stalled.

Granted, this isn’t all the young man’s fault. We do live in an age where every particular is dissected and disseminated until its original intent is no longer the conversation. Problem is, his polarizing moments have followed the precepts of Instagram in that they provided optics without saying a word. Wearing socks that depict cops as pigs, sporting a Che Guevara t-shirt and touting the qualities of Fidel Castro makes Kaepernick look like one of those Hollywood fools. It sure as hell doesn’t further a movement that is in dire need of a driver.

All due respect to Kaepernick, but the anthem protests needed an Ali; it needed a voice that wouldn’t shrink under the scrutiny, a presence whose conviction would augment the steep and bumpy road to progress. I realize movements don’t work that way and that to wish for such a thing is to mitigate the organic qualities that make a cause worth fighting for. Rosa Parks didn’t choreograph her bus ride home, after all. She was just tired of the way things were and decided to do something about it.

Kaepernick is the accidental social activist. People forget that in the genesis of these anthem protests, his football career had suffered a downward trajectory. Defensive coordinators had figured him out; his statistics and his team’s record bear this out. Long gone was the shine of that Super Bowl ride he took San Francisco on a few years earlier.

It made his banishment from the league that much easier to justify, because owners could point to the numbers in explaining why he couldn’t latch onto another job after his team cut him loose. This ignores the fact that Kaep was still a better option than a bunch of quarterbacks who were still drawing paychecks from NFL teams. Not to mention the fact that my Miami Dolphins paid Jay Cutler- a quarterback with nothing left in the tank- 10 million dollars to come out of retirement for what amounted to a four month Florida vacation. And I would be remiss if I didn’t mention the fact that one of Kaepernick’s former teammates and a fellow protester, Eric Reid, is still looking for a job. Reid is a twenty six year old all-pro who just so happens to be in his prime, so I’ll let you connect the dots on that one.

When you do the math, the anthem protests have resulted in jobless brothers and a shitload of rhetoric and double talk from both sides. From President Trump to Serena Williams to the NFL cutting a big check to various social causes as if that makes up for the fact they just don’t get it. Call me a cynic, but that doesn’t feel like progress to me.

The Nike ads speak to us in the language of our times. It’s a glossy meme that basically tells us to pick a side, theirs. It’s a ballsy move by a company that practices its Just Do It preach. Bringing Kaepernick into the fold was provocative, not to mention, good business sense.

Because it’s the bottom line that is driving this, not the company’s social conscience. This is, after all, a company that made its bones on three hundred dollar sneakers made in third world countries for pennies on the dollar. Phil Knight is a brilliant businessman who will never be confused with Mahatma Gandi.

There are going to be plenty of people who slam Kaepernick for getting in bed with a company that doesn’t give a fig about social justice. But not me. I never begrudge a man for making bank, it’s un-American. I simply hope that with this new platform, he is able to grow into the job of social activist. He proved that he’s invested in furthering his brand. Now I want him to use Nike the way they’re intent on using him. Use this spotlight to mobilize, challenge and yes, speak out.

33 thoughts on “There’s a time for kneeling, and a time for standing up”