By now you’ve probably seen the video of Chris Morgan, the thimble-fuck who went on a tirade about women in a Long Island bagel shop recently. Turns out, that’s his shtick; to engage in public rants and then slap ’em on YouTube. He considers himself the Martin Luther King of short dudes and I’m not kidding. So I gotta wonder how long before he gets a White House invite. I want to see the handshake . . .

Speaking of . . . Bums. They should fine ballplayers who can’t bother running to first base. Let’s say . . . half a million Wagners every time they pull that shit. Their lazy asses would either find some urgency right quick or they would owe the MLB money in perpetuity. Better yet, MLB can set up a GoFundMe page with the money, for the fans who have to put up with crap like that.

Speaking of . . . Weeds. Cassandra Walker was fired from her job at Dairy Queen because someone wanted a Moana birthday cake and her boss fucked up the translation since this is Georgia we’re talking about. So . . . this happened. 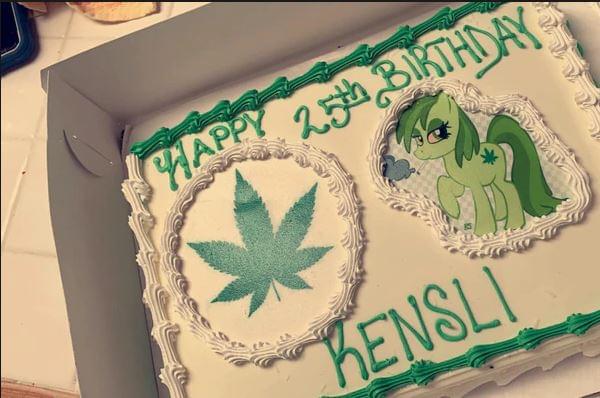 Fired? Give her a raise, because that is an amazing fucking birthday cake! I saw Moana . . well, the first three minutes anyways. And believe me, a wasted Little Pony is way better. Yo Duff Goldman, give this cake artist a job! Immediamente!

Speaking of . . . Cheeching. I partake on a semi-annual basis and my fifty third birthday seems a logical toking point. In spite of the fact that I’m not a drug user as per the definition (this guy), I do have my very own dealer. Now all I need to do is get in touch with Cassandra Walker for my cake.

Speaking of . . . Skunk. What’s up with the peeps who still abide by twelfth century hygiene? Otherwise known as BO. Listen, unless you have a serious medical condition, are homeless or Amish, there is no excuse. We are GED level lunchboxes compared to the other species that inhabit the earth. Soap and deodorant are the only things separating us from the sloth, and if you can’t bother to dabble in the stuff, then go live on that deserted island Tom Hanks made famous.

Speaking of . . . Stench luggage. You ever go in a public restroom and get hit in the face with that shroud of unspeakable hell? I call it the thousand year stench, after which I’m always forced to hold my breath. Only problem is, when I’m on the spot like that, I can’t hold my breath for very long. If I’m in the water, I can hold my breath for about a minute. But under pressure? Two and a half seconds, after which I bury my nose in my arm and curse the existence of humanity as I perch at the urinal and exhort my bladder to speed it up.

Speaking of . . . Pissing contests. Oscar Wilde would be thrilled to know they actually have their own Wikipedia page.

Speaking of . . . Wicked genius (Wilde . . not pissing contests), Peeps either get the movie Under the Silver Lake or they do not. I happen to think that if this flick was a stock, it would be a can’t lose long term investment. Because someday it will achieve cult status for being what it is. Hitchcock in Kurt Cobain’s iconic sweater.

Speaking of . . . Sweaters. I ain’t in need of one currently. Because it’s a hundred fucking degrees outside (wind chill) and I just put a bounty on Al Gore’s head.