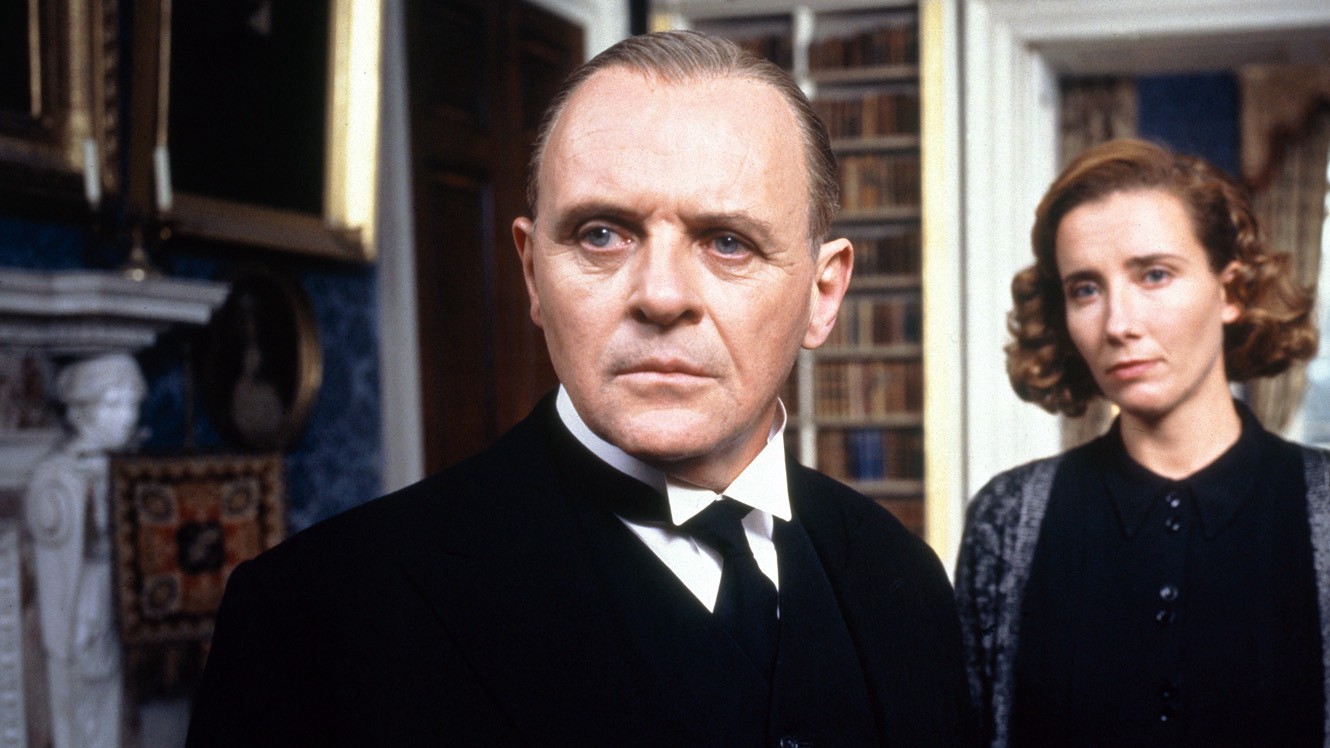 Da Boss here at Sorryless has been breaking my balls lately, bringing in udda headlinahs to do my job. Can you believe this fucking guy? So he was gonna have James Caan come in for this movie review because he didn’t think I would find it interesting, the clueless prick. I hate to admit it but five minutes into the movie, I thought to myself that the asshole was right. I was ready to close my eyes and pray for a coma. Good thing I snuck in a bottle of Chivas and some gabagool.

Anyway, the story is about this butler named Stevens, played by the same guy who plays that psycho nutbag in Silence of the Lamb Roast. Only he don’t eat faces in this movie so what’s the use? He plays this boring as fuck butler, oh I’m sorry . . reserved boring as fuck butler at this place called Darlington Hall. Yanno why the British lost the revolutionary war to us? Because they were too fucking busy thinking up fancy names for their houses.

So Stevens, who’s about as exciting as a stale piece of Wondah bread, has a thing for this really hot chick named Miss Kenton. She’s played by Emma Thompson, who is a real piece of ass! But in this flick, she’s a prude. Oh, I’m sorry . . she’s a repressed prude.

This Darlington Hall place hosts a lot of parties and the people all have sticks up their asses. Oh yeah, and most of em are Nazis. In one scene that really pissed me off, they try embarrassing Stevens by asking him a lot of political shit. Instead of splitting their heads open, he pretends he’s as stupid as they say he is. What a pussy!

Since Stevens is such a limp dick, Miss Kenton gets another co-worker to bang her and later on, the guy ends up wanting to marry her. These British guys have no fucking idea when it comes to women; they either don’t do jack shit or they buy the ranch, what the fuck? So Miss Kenton lets Stevens know she’s getting banged by anotha guy and that this guy wants to marry her, only she doesn’t say it that way since she’s so delusional. No . . I’m sorry, she’s so demure. Fuggedabout it . . she ain’t getting a rise outta Stevens because his goal is to never get laid.

At the end of this movie, other than bringing me two hours and fourteen minutes closer to death, nothing happens. Stevens goes to see this Kenton chick and asks her to come back to Darlington Hall, but he still can’t admit to her that he’s always wanted to bang her. So . . you know how women are, she tells him she’s gonna stay with her husband because she finds Stevens about as appealing as a Ritz cracker you find under the sofa cushions. Only, she doesn’t tell him that at all because she doesn’t have ta, yanno? All she has to do is give him a look.

Stevens goes back to work and at the end of the movie he saves a pigeon that gets stuck in the hallway. The pigeon is symbolic of freedom, and you’re probably wondering how I figured that one out. Well, the pigeon gets freed . . just like me, because it means this sad fucking excuse for a movie was finally ovah.

59 thoughts on “Joe Pesci Review: Remains Of The Day”