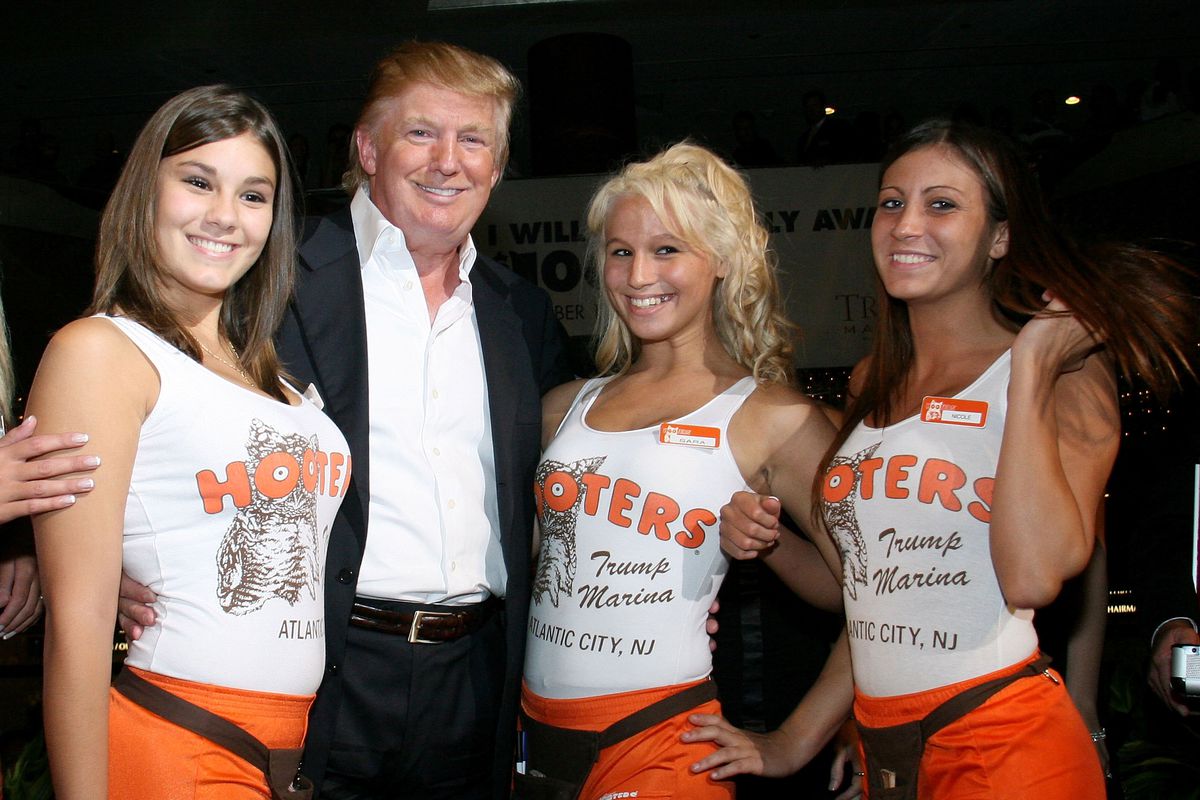 I had the choice between watching the final season of The Man in the High Castle or interviewing Donald Trump. And I blew it. But hey, I figured it would be my best chance to get into the White House since it’s painfully apparent they let anybody in these days.

Of course, I should’ve known this was a big mistake when I endured a three hour phone call in which his publicist recited a list of topics that were off limits. I was promised a second interview if I played by the rules, and now I have to decide whether I want to opt in or have a vasectomy. Decisions, decisions!

Trump enters the restaurant and we shake hands. His hands are smaller than Miss Havisham’s dreams in the novel Great Expectations. I decide not to mention this fact since I want to get inside Trump’s head and have a look around. I imagine it has more square footage than my last house. He orders an iced tea and then one of everything off the menu and then tells me he’s got ten minutes . . or however long it takes for his wings to be served.

What are your thoughts on the democratic field?

Trump- I have no thoughts.

I recognize that. Okay, let me rephrase the question. What is your opinion of the democratic field?

Those are pretty strong accusations you’re making. Do you care to elaborate on the murderers and child rapists you’re referring to?

Trump- I never elaborate, it’s a time waster. I say it one time . . and then I say it a hundred more times. And then I retweet it all day.

You do realize that you can’t go around calling people murderers and child rapists in the real world unless you have . . .

The real world is the place where you don’t live.

Well, up until three years ago it was great. We had no idea how good we had it because we were too busy blaming Obama for everything.

Trump- I hate that guy.

Trump- You’re looking at him.

Let’s go back to your statement about murderers and child rapists. Who are you referring to and what evidence do you have to support these serious allegations?

Trump- I don’t worry about evidence unless it helps me. When I say they’re murderers and child rapists, I mean they’re just as evil as those people. They don’t have to commit those horrible acts for me to call them those things . . .

Well, actually . . a person WOULD have to commit those atrocious acts . . and then be found guilty in a court of law, before you could refer to them in this way.

Is there any truth to the rumor that Geraldo Rivera will be your Vice President should you win a second term?

Trump- I trust Pence with my life. But if he ever screwed me over, I would bury him as many times as you could bury a person. Then yes . . Geraldo would be a great choice. Not that I need to win over the Hispanics because you know, they love me already.

Let’s talk about the border wall.

Trump- You can ask me anything.

As part of your 2016 Campaign-alooza, you pledged that the wall would be completed in three and a half years at a cost of twenty one million dollars and that Mexico would pay for it. But that hasn’t happened. In fact, the Pentagon is slashing programs and siphoning those monies to use for border wall construction. Also . . your administration recently announced it had built 100 miles of wall but failed to mention that most of that construction simply replaced barriers that already existed. How do you explain this?

Can we talk about Russia?

Trump- Nothing to talk about. I’m great friends with Russia, and Putin respects the hell out of me because I have the biggest hands he’s ever seen.

Big hands are important to you, aren’t they?

Can you repeat that for me? Please?

Trump- I love big hands, and I cannot lie.

So you’re saying size matters to you.

Okay, now that I’ve milked that for all it’s worth . . . who is your favorite modern day president, other than yourself.

Michael Scott . . . was the fictional Scranton branch manager for Dunder Mifflin. He was never president.

Trump- False! He was president for nine seasons on NBC. I met him a couple times when I was doing the Apprentice!

Okay, he was only the manager for seven seasons . . and he was president for zero seasons. In fact, he never even played the president in a movie or TV show. But I can see how you may have emulated his managing style.

Trump- That guy understood the job, he knew how hard it was.

That’s what she said.

Sorry, that was an Abe Lincoln joke.

Trump- Great president, but I’m better, and I gotta be honest. I prefer presidents who didn’t get shot.

As I begin to contemplate ending my life by plunging a spork into my jugular, his Doritos encrusted wings make the scene and save my life.

Trump- Didn’t you order anything?

67 thoughts on “Trump: The Interview”