It’s the end of the world as we know it and I feel sorry for the close talkers.

And the high fivers, them too. They were fringe players before COVID-19, so you can hand them their walking papers now. Just make sure you’re wearing gloves. Oh wait . . . maybe not.

I’m not taking this pandemic personally. I really don’t think it’s a matter of God smiting us or Ozzy Osbourne haunting us. I kinda see it more as a byproduct of eight billion tenants in a residence not built for such high volume usage. Bad shit starts happening when resources and personal choices camp together. The shit is combustible.

As a true introvert and not a poser who chooses to label themselves as such in order to make friends (a self defeating purpose for the true introvert), I’m okay with the rules. I am miffed at the peeps who rail on about their freedoms being usurped. And I am pissed at the clueless vagabonds who still go to Target to piss around on their phone for an hour and pick up Red Bull. And I would love to send the knuckleheads who want to party like it’s 2019 to a remote island, along with all those genius investors who think the one with the most toilet paper wins. We can send along the 2nd amendment impulse buyers so’s they can play referee. 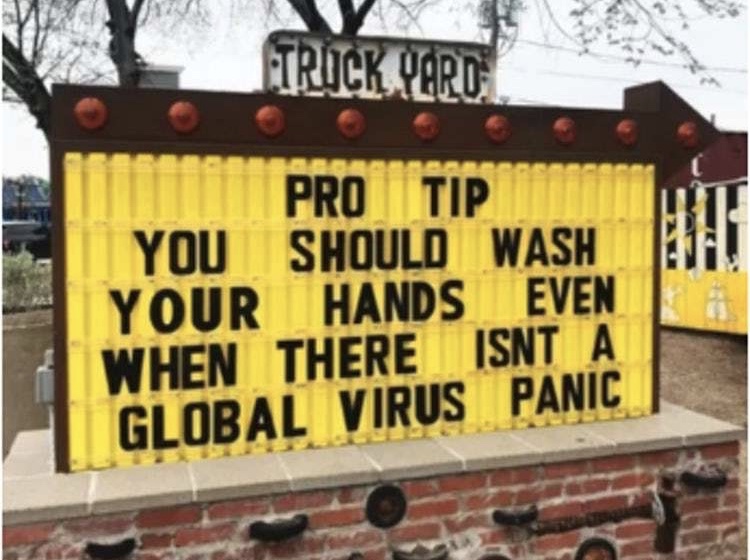 Self Isolation– Shut the front fucking door with this term, please. It’s redundant, and incorrect. If you live alone, then of course your self is isolating. And if you don’t, then you’re simply isolating from others.

Social Distancing– The term is downright Orwellian in its bold font gravitas. Because this is something that guy would’ve gotten drunk on. It’s a term I use, even though I find it incredibly creepy.

Flattening the Curve- It’s like laying down spike strips on a speeding virus in order to lessen the impact on hospitals and infrastructure. It sounds like a show you’d find on Bravo.

Shelter in place- Another redundant term, unless your ‘place’ happens to be a boat. In which case, congratulations. When you shelter in place, it means you’re keeping your ass at home excepting for essential trips such as liquor/grocery/liquor store shopping. If you abide by the two parts liquor store to one part grocery store, you’ll make it through just fine. Ask Ina, she knows.

Drive Through Testing- You don’t get fries with it.

As for predicting COVID-19, contrary to popular belief, the Simpsons did not call it. And neither did Dean Koontz. In the case of the latter, he got Wuhan and he got 2020 but everything else? Not so much. And sorry movie fans, but the Steven Soderbergh flick Contagion was based on the H1N1 “swine flu” of 2009.

The system has been upended and the idea that our behaviors will not be influenced as a result is not just foolish, it’s dangerous. Our politics is already building cabins on the mountainous terrain of this time. Corporations will pimp their brands in caridad, but profits will become more important than ever. Which means sharper corners to cut in the form of more low wage jobs, an increased reliance on AI and the environment? Fuck that place!

It stands to reason the most important work force will involve humanistic enterprises. So if you’re one of those peeps who insists on being a brand? Stop. Go back to being a human being while there’s still time. Because if we keep whittling humanity down like this, pretty soon it’s going to turn into a spear.

I’m of the opinion that this time in our world’s history has been a warning. We either heed this clarion call or we suffer the consequences when the next strain of ungodly comes calling and decides it’s time to wipe the slate clean. And of course there are going to be plenty of peeps who snicker at such a thought, insisting it could never happen to us.