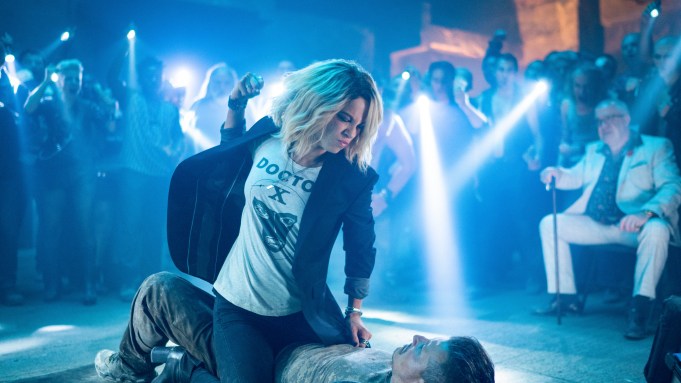 Lemme start by issuing the oh so important spoiler alert before a certain blog owner with a stick up his ass for such things texts me one more fucking time about it. I already threatened to kneecap him but he doesn’t scare easy, which is typical of stupid assholes.

Many people ain’t aware of this, but I think women can do anything us guys can do. Run for President, be an astronaut or a basketball player? Sure, I mean of course. But in this instance I’m talking about every day stuff. Yanno, like hiring an escort on a business trip or murdering their significant other.

Lindy Lewis- played by the lovely Kate Beckinsale- has the kind of temper that will wake you out of a sound sleep just to let you know she’s gonna kill ya. So I was hooked on the chick while the opening credits for the movie Jolt were still getting in the way. That British accent and those titanium high heels work on my last hormone and I mean that literally, since I got one left.

Lindy has the kind of temper that has its own term- intermittent explosive disorder. And just like explosive diarrhea it will make the unlucky bastard who pisses her off shit his pants too. When she gets pissed, she turns into a cross between Chuck Norris and my Aunt Julia.

Stanley Tucci plays her Mr. Miyagi. He’s her psychiatrist and life coach, because with the issues she’s got going, he’s gonna be rich. Get this, he rigs this electrode device that she wears, and whenever she feels like she’s about to lose it, she pushes a button and it shocks her. Don’t ask me why that doesn’t piss her off, but I’m not a writer so what do I know?

Anyway, Lindy meets an accountant (Jai Courtney) who says he works for one guy. That always means there’s some crooked shit going on and sure enough there is, because a day after meeting him, he ends up dead. Now she’s really pissed because they had a great second date that ended with breakfast. So watch the fuck out, bad guys, because the British are coming.

Before you know it, Lindy is killing bosses, because there’s always way more than one boss. Of course, the cops gotta get involved so’s they can take the credit when she cracks the case. Laverne Cox and my pal Bobby Canavale play the cops, and not for nothing, but he plays good cop so well that Lindy’s got breakfast eyes for him before the flick is over.

Oh and get this, the accountant who got knocked off ten minutes in? Turns out he faked it so he could be the boss. What a stupid fuck this guy is, because she’s already killed more bosses than a hitman for the Gambinos. This chick already rearranged the face of a shitty waitress so what do you think she’s gonna do to a guy who doesn’t just kick her to the curb but fakes his death to do it? And then comes back later to torture her with her own device as he laughs at her?

She turns him into meatloaf by handing him a bag with a bomb in it, which proves she musta really liked this guy a lot, the lucky bastid. So after he’s gone she goes back to her apartment to find Susan Sarandon waiting for her. She’s pretending to play a creepy doctor but she’s really there to let us know there’s gonna be another movie.

On a scale of 1-10, I give dis movie an absofuckinglutely.